The Prime Minister of Singapore, Mr Lee Hsien Loong, is an eloquent speaker like his father, founding PM Lee Kuan Yew, who passed away on March 23 at age 91. 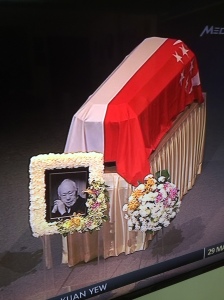 Maybe not as powerful, possibly because the times were different with the elder Lee having been in the forefront when the country was facing difficult times — during Japanese and British occupation, merger with Malaysia, expulsion from Malaysia, building Singapore from nothing and many other challenges. 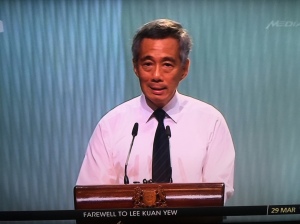 But nonetheless Lee Hsien Loong is a silver-tongued speaker who could hold audiences in a thrall. This was evident when he delivered a brilliant, moving tribute to his father at the funeral service that ended about 30 minutes ago.

He became very emotional at times during the course of his moving tribute, almost breaking down when PM Lee Hsien Loong recalling the contributions of his father to the country. 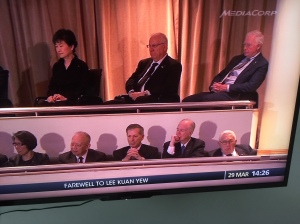 “The light that has guided us all these years has been extinguished. We have lost our founding father Mr Lee Kuan Yew, who lived and breathed Singapore all his life. He and his team led our pioneer generation to create this island nation, Singapore.”

“Together, we have grieved as one people, one nation. We have all lost a father. We are all in grief. But in our grief, we have come together to display the best of Mr Lee Kuan Yew’s Singapore,” he added. 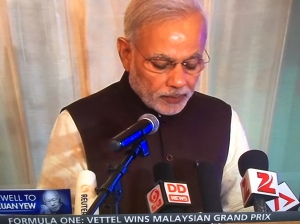 Singapore could have moved away from multiracialism at Independence in 1965 as it was a Chinese-majority country, one of the reasons that led to its separation from Malaysia, he said. 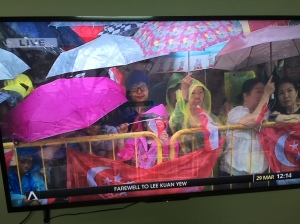 Nobler Dream: “Instead, he went for the nobler dream of a multi-racial, multi-religious nation. Singapore would not be based on race, language or religion, but on fundamental values – multi-racialism, equality, meritocracy, integrity and rule of law. 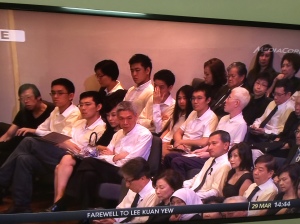 He recalled that in 1961, prior to the merger with Malaysia and subsequent expulsion, Mr Lee Kuan Yew had said in a radio talk. “My colleagues and I are of that generation of young men who went through the Second World War and the Japanese Occupation and emerged determined that no one – neither the Japanese nor the British – had the right to push and kick us around.”

The Japanese Prime Minister, Mr Shinzo Abe, was present at the funeral service.

The transcript of Mr Lee Hsien Loong’s speech is available at http://www.channelnewsasia.com/news/singapore/mr-lee-kuan-yew-lived-to/1750514.html

Mr Lee Kuan Yew’s remains were then taken on a gun carriage to the Mandai crematorium for a private cremation. 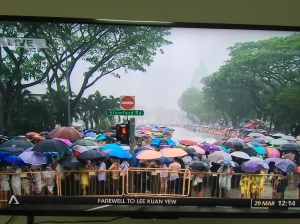 My wife and elder daughter were able to pay their last respects when the carriage was passing through Upper Thomson Road. I was watching the service live from my home on television. I visited the Parliament House yesterday, where he was lying in state, to take a bow.

I am glad all four of us in the family were able to have a final glance, joining the nation in bidding him farewell.

May your soul rest in peace, sir!